1198 ~ Sir Robert le Scrope is slain on Crusade at the siege of Acre.

1364 ~ Sir Henry's third son, Sir Richard becomes a member of Parliament for the county of York. He rises to the title of Chancellor to the King.

1378 ~ Sir Richard Scrope, Steward of the Household under King Richard II, agrees a contract with mason John Lewyn for the construction of the southern range of the castle at Bolton. The following year he obtains a licence to crenellate from the boy King, on work already completed.

1393 ~ Sir Richard Scrope's eldest son, Sir William Scrope, buys the Kingdom of the Isle of Man, and is created Earl of Wiltshire.

1399 ~ The building of the Castle Bolton is completed. King Richard is deposed and murdered. His loyal Treasurer is beheaded without trial.

1415 ~ Sir Richard, 3rd Lord Scrope of Bolton, fights at the Battle of  Agincourt.

Lord Henry, 3rd Lord Scrope of Masham, is brutally executed outside the walls of Southampton on the eve of Agincourt for his involvement in the Earl of Cambridge's revolt against King Henry V. His body is dismembered and his head sent to York where it is left to rot on the Micklegate Pike as a deterrent to traitors.

1459 ~ Sir John Scrope is made captain of the fleet for King Richard III and is granted lands.  He also supports the rebellion against King Henry VII.

He is pardoned with the stipulation he must live within 22 miles of London, where the King could keep an eye on him.

1536 ~ Bolton castle is set alight on King Henry VIII's orders, as a consequence of Sir John Scrope's support to the Catholoic cause.

1568 ~ Mary, Queen of Scots, arrives at Bolton Castle in the care of Sir Henry Scrope. The following year on a wet January morning, Mary leaves Bolton Castle for the grim fortress at Tutbury in Staffordshire to begin a weary eighteen years of incarceration before her execution in 1587.

1645 ~ Having defended Bolton Castle for King Charles I during the Civil War, John Scrope surrenders only after all his horses have been eaten by the starving garrison without hope of relief by Royalist forces. For this act of defiance, the Castle is later slighted. Before work can be carried our John Scrope dies of the plague, aged 23. His estates pass to his sister Mary. 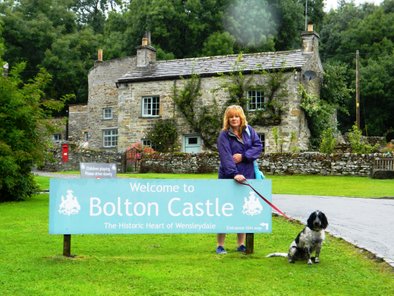 Bolton Castle is a 14th century castle located near Wensleydale in the village which takes its name from the Castle. Its high walls and towers stand tall and commanding over the small village that surrounds it.

There is dedicated parking at the rear of the castle and can also be reached on foot from the village where there also on-street parking with due consideration, for the taking of photo's as we did.

There are beautiful gardens and plenty to see on the inside of the castle which are both well worth a visit. Unfortunately it was a rainy day when we visited.