1064 - Harold Godwinson, successor to Edward the Confessor, King of England, is held captive by Duke William of Normandy. During his captivity Harold recognises William's claim to the throne and promises to yield the important fortress of Dover to him.

1066 - Just one day following Edward's death, on January 5th 1066, it is Harold and not William who is hurriedly crowned King of England. After months of suspense over claims and threats to the throne from both Duke William of Normandy and Harold Hardrada, King of Norway, it is the the Norwegians who invade first. On September 25th Hardrada and Tostig (Harold's dissident brother and exiled earl of Northumbria) are defeated and killed in the Battle of Stamford Bridge, Yorkshire. Whilst celebrating his victory at York, Harold learns the news that William has landed with his army at  Pevensey just along the coast from Dover. Harold's tired army is force-marched south to meet the new invaders who enjoy a full two weeks consolidating their position. Following a hard-fought day long battle on October 14th which ends in Harold's death and defeat for the Saxon's, Duke William of Normandy and his victorious army advance on Dover en-route for his Christmas Day coronation at Westmister Abbey . The inhabitants of Dover speedily surrender from behind their timber palisades. William spends eight days at Dover strengthening the fortifications.

1067 - Count Eustace of Boulogne attacks the castle in support of the Kentish rebels. The attack is unsuccessful.

1139 - The castle is besieged by King Stephen's wife Matilda and surrenders only when the constable decides to switch sides.

1180's - Following decades of updating the castle's defences, Henry II embarks on a major rebuilding program carried out by one of the most accomplished medieval engineers in Europe, Maurice the 'Engineer'. Over the next decade huge sums, about £6,000, are spent in making Dover the first concentric castle in Europe.

1189 - Following Henry's death, Richard I 'Lionheart', continues the final building work of Dover Castle with money raised from his crusades in the Holy Land. On return to Normandy he is captured and imprisoned in Austria. Following the huge ransom required for his release and then on the building work for Richard's favourite castle at Chateau Gaillard in Normandy, work at Dover grinds to a halt.

1204 - Normandy is lost to the French. King John devotes large sums of money in completing further work on the castle.

1216 - In support of the rebel barons against King John a French army lands under Prince Louis. In response John has barely enough time to provision the castle. Within months, only Windsor and Dover castle's hold out against the rebellion. Prince Louis lays siege to Dover. Attacks and counter-attacks ensue with neither side gaining any advantage. Louis changes tactics and begins undermining under the northern barbican. Hubert de Burgh orders his men to counter-mine the French tunnels. Eventually the French are successful in bringing down the eastern of the two towers and in pour their men into the outer defences of the castle. Hubert de Burgh and his knights are ready for them and bitter hand-to-hand fighting follows, which ultimately sees the garrison force back the French to retreat through the breach. Faced with what the French believe to be an implacable and determined garrison, a truce is called. Had Louis pressed home his attack further, he would have almost certainly have taken the outer ward and entered the inner enclosure of the castle. Fortunately for the besieged garrison, within a few months King John dies in Newark Castle and his son, Henry III, with the backing of the Church and a number of influential barons, is proclaimed King. In the face of this new unity amongst the English, Prince Louis wisely retreats to France.

1217 - Prince Louis returns to Dover and resumes his siege of the castle. Three days later the French are defeated at the battle of Lincoln, effectively signalling the end of the war. Dover remains uncaptured although badly damaged.

1274 - King Edward I arrives at Dover castle on return from his crusades in the Holy Land. On his previous visit to the castle, as Prince and heir to the throne, he had been kept prisoner there by the rebellious barons.

1642 - A small party of Parliamentarians seize the castle in a surprised attack on the outbreak of Civil War. The castle remains in Cromwell's control throughout the war until the Restoration, and thus escapes further attack or slighting.

Dover Castle, one of England's greatest, stands high on the famous white cliffs looking out across the English Channel towards France. Few military sites are older, for a Celtic hill fort was here before the Roman Conquest. For nearly two thousand years would-be invaders of England have been confronted by a strong fortification on the high cliffs. It is quite likely that the outer bank and ditch are of Iron Age origin. Its strategically vital position at the point where England is nearest to the coast of France has given it a unique place in British history. It is without doubt a most powerful, massive and imposing building.

It was a state-of-the-art castle in medieval times, displaying some of the most advanced defensive architecture available. With huge earthworks and ditches, concentric walls bristling with towers, formidable gates, two barbicans and a massive keep ninety-eight feet high with walls up to twenty-one feet thick, Dover was unrivalled in its finished strength and splendour.

Access to the castle as you would expect from one of the largest and most famous in the country, is very easy with plenty of parking at the castle. This is just as well, as you'll need all your energy if you want to explore the entire site, which is massive, including castle, outer curtain walls, earthworks and underground passage ways, from medieval, Napoleonic, Second World War & Cold War. You will definately need a full day, as there is so much to see and do. Thoroughly well worth the visit if you like your castles and history, Dover Castle has just about everything from pre-history through to cold-war Britain. 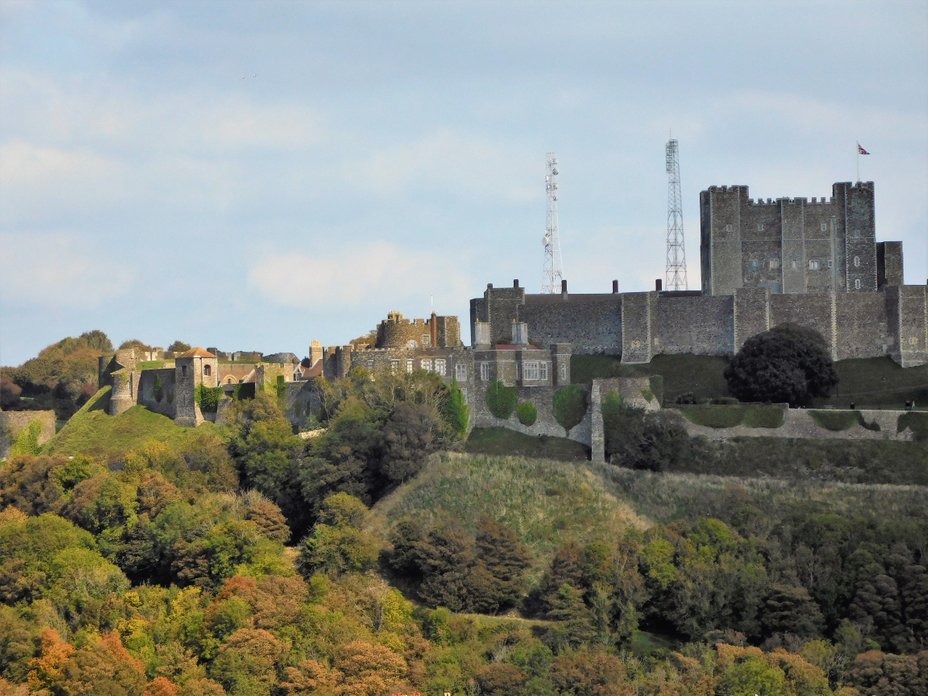