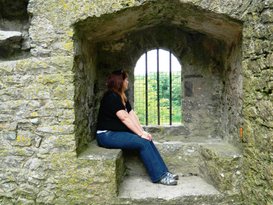 Pembroke is one of the mightiest and most impressive castles in Wales, not Welsh, but purely Norman.

It was never captured from the original invaders in four hundred years of struggle.

The site is a rocky headland sticking out into the Pembroke River, controlling entry into the Haven and in a dominating position over the low-lying peninsula. Later, it became all-important as the setting-out point for the invasion and control of Ireland. With its vast circular keep standing over seventy feet high and walls that are more than 19 feet thick at its base, surrounded by an inner and outer ward with thick walls, towers and an impressive gate-house, Pembroke was considered one of the safest strongholds in all Wales.

1093 - The forces of Roger de Montgomery, the major Norman invader of Wales, arrives at Pembroke and his son, Arnulf builds a simple "fortress of stakes and turf", cutting off and controlling the headland.

1096 - A Welsh army lays siege to Pembroke Castle. The castle's constable Garald de Windsor, with just four pigs to his entire meat ration for the garrison, pretends he has supplies to last for months. He orders the carcasses to be thrown over the walls at the besiegers and writes a letter suggesting that he needs no reinforcements for at least four months and has this letter dropped where it would be found. Upon finding this letter the Welsh abandon their siege.

1102 - The Montgomeries are disgraced but the constable Gerald de Windsor is kept on at the castle.

1138 - King Stephen creates the Earldom of Pembroke for Gilbert de Clare and he is succeeded by his son Richard de Clare who also inherits the wooden castle. Richard, is later instrumental in the conquest of Ireland.

1171 ~ King Henry II of England meets with the Welsh Lord Rhys, to confirm him in possession of his newly restored princedom of Deheubarth with the release of his son, Hywel Sais, whom he had held hostage for eight years. During his long captivity the young Hywel had learnt the language of his captors - hence his nickname Sais (English-speaker).

1189 - Richard's daughter Isabel is married to William Marshal, by King Henry II and so becomes Earl of Pembroke. William's immense military power means that the Earldom is virtually independent of the Crown. William later crusades with King Henry II, champions the causes of both King Richard I and King John, and advises his King on the Magna Carta. Later he is Regent to the infant King Henry III as the most influential Earl in the Kingdom.

1200 - William builds the great keep at Pembroke Castle. Upon his death he is succeeded by his son William.

1230's - Richard Marshall, out of favour at the English Court, succeeds his elder brother William, but is refused his inheritance by King Henry III and is forced to lay siege to his own castle. In 1234 he is murdered in Ireland. He is succeeded by his brother Gilbert.

1241 - Gilbert falls from his horse and is killed whilst jousting during a tournament. He is succeeded by his brother Walter, who himself dies just four years later and is succeeded by the last Marshal brother Anselm, who survives just 18 days. His death, childless, fullfills a curse put upon the first William Marshal by an Irish bishop whom Masrhal had robbed. He cursed the Earl and said all his sons would die childless.

1280 - William de Valance inherits the Earldom of Pembroke through marriage and later builds the outer walls to the castle.

1296 - William dies in France and is succeeded by his son Aymer. Ten years later he defeats the Scots at Ruthen but shares in the defeat at Bannockburn eight years later. He later dies in Paris whilst on an embassy mission to King Charles IV of France.

1389 - The last Earl of Pembroke, John de Hastings, whose family succeeded the de Valance Earls, dies at the age of just 17, thus ending 280 years of blood and marriage inheritance. The Earldom becomes property of the Crown.

1400 - The governor of Pembroke castle saves himself a siege by Owain Glyndwr by making a payment to the Welsh leader.

1456 - Henry Tudor, founder of the Tudor dynasty and later crowned Henry VII, is born at the castle.

1470's - The castle is besieged by Yorkists during the War of the Roses and he is forced to flee to Brittany.

1485 - Henry returns to claim the Crown at Bosworth Field. He makes his son Henry VIII Earl of Pembroke.

1644 - Pembroke declares for Parliament during the Civil War and is besieged by Royalists until it is relived by a Parliamentary Fleet, who go on the offensive and capture other castles such as Haverdfordwest, Tenby and Carew.

1648 - Pembroke's constable declares for the King and is besieged by Cromwell himself for almost two months. Exhausted and hungry the garrison surrender. The constable bravely faces a firing squad on 25th April 1649, four months after his King has been executed. Cromwell orders the castle to be destroyed. Great damage is inflicted and it is left to decay and be plundered for its stone.