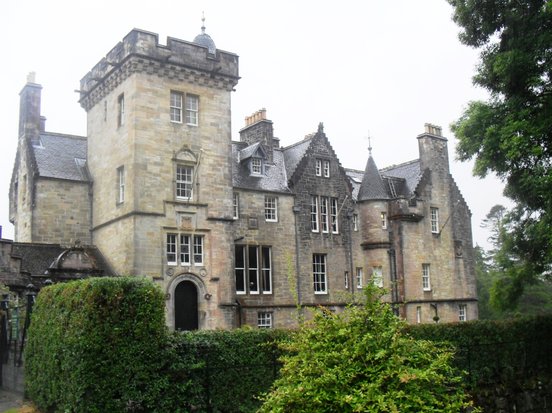 Torosay Castle you see today is a victorian house, set within beautiful grounds, no longer open to the public.

However, the site itself is quite ancient going back many centuries.

Torosay Castle occupies a beautifully sheltered south-facing location on the north west side of Mull's Duart Bay. Torosay translates Torr Raseach – hill of shrubs, from which it takes its name.

Originally the site was inhabited by the abbots of Iona.

Later, for many centuries all the land in this part of the Isle of Mull belonged to the Maclean's of Duart.

1689 ~ The MacLean's forfeit their estates after backing the losing side during the first Jacobite uprising with the Maclean lands ending up in the hands of the Campbell Dukes of Argyll.

1820 ~  The Duke of Argyll sells off some of the more far-flung parts of his landholdings, and Torosay and Duart Castles end up in the ownership of Colonel Campbell of Possil Park in Glasgow.

Colonel Campbell immediately started to develop his new estate here, and work began on gardens and on a Georgian house nine years later.