1330s ~ The Ogles obtain land in Tosson, but it takes another half century before they manage to take possession of the entire township.

1410 ~ Upon the death of Robert Ogle, his eldest son John chooses to continue to live in his fathers fortified mansion of Ogle Castle. However, the very next day after his father's death, his ambitious younger brother Robert, awaits until just after midnight and with 200 archers and men at arms, soldiers and Scots alike, and all enemies of the King of England, put the castle under siege. After more than four days they take possession of the castle.

1411 ~ John petitions parliament to ask King Henry IV for his father's property to be returned to him. The king orders the sheriff to take the property into the King's hands and to order Robert to appear before the King and his council to answer the charges against him. He is ordered to leave the property and instructed that if he fails to appear before the King, he will be declared guilty, and his elder brother John will automatically be given the property. He and his men would also be imprisoned until they paid fines to the king.

1414 ~ Robert Ogle, having previously impressed inflential lords over his conduct regarding Ogle Castle, is named in a commission to obtain a truce between England and Scotland.

1423 ~ The duke of Bedford appoints Robert as his lieutenant and captain of Berwick.

1424 ~ Robert is part of the embassy to escort King James of Scotland, from Durham into Scotland. He is later made warden of Roxburgh Castle.

1429 ~ Robert places the castle of Berwick into the care of William Swinburne.

1436 ~ By the time of his death, Sir Robert posessions include his fathers house of Ogle Castle and towers of Hepple and Great Tosson

1522 ~ Lord Ogle leases the tower to a local landowner, William Gallon, who holds it for the next 24 years.

1553 ~ A survey of Border towers for King  Henry VIII reports “At great Tosson is a tower of lorde Ogle’s inherytance, not in good rep’ac’ons”.

Lord Wharton, the Deputy General of the Marches, establishes a watch system over the lawless borderlands from Scottish Reivers, whereby two men of “Mykle Tosson” are to keep watch every night. If they raise the “outcry” by shouting or blowing a horn then every man of the village has to immediately “rise and follow the fray”.

Great Tosson Tower is located in the hamlet of the same name high above the south side of the River Coquet. It has walls 6 feet thick and sits squat on the edge of a farm, with parking and access provided. Much of its lower outer facing stone work has long since been removed for the building of nearby cottages and farm buildings. 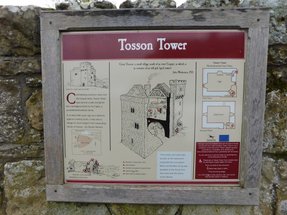