Kilpeck Castle lies at the back of the fabulous ornate church of St Mary & St Davids. It consists of a motte rising about 20 feet high with a semi-circular bailey to the east. There are outer earthworks and remains of a stone shell keep upon the motte.

With consideration you can park near the church to explore the castle, but make sure you include the very picturesque church, especially its fabulous doorway. 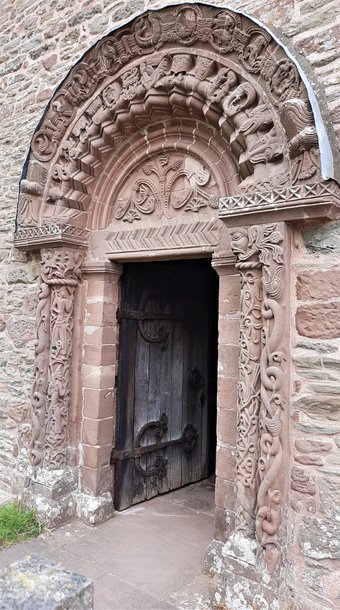 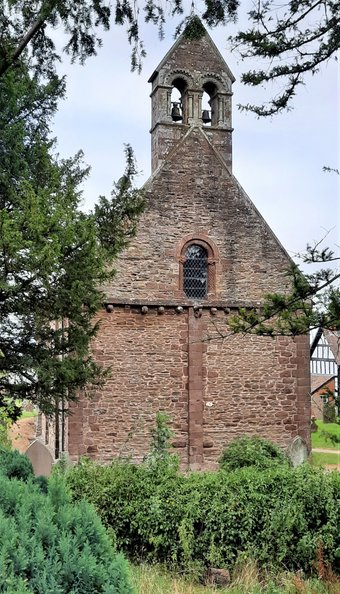 1086 ~ The Domesday survey records Kilpeck is given by William the Conqueror to William fitz Norman.

1090 ~ William Fitz-Norman builds a motte-and-bailey castle to serve as his administrative centre in the district of Archenfield.

1134 ~ Hugh de Kilpeck gives his revenues to the newly-founded priory. Hugh also gives the nearby church of St. David and the chapel of St. Mary within the castle grounds to the Abbey of Gloucester.

1160's ~ Hugh commissions the building of a new church at Kilpeck and for the re-building of the castle before his death in 1169.

1200 ~ John de Kilpeck and his heirs are granted the jurisdiction of all the forests of Herefordshire in perpetuity by King John.

Due to the very young age of Hugh, William de Cantilupe, sheriff of Herefordshire, is appointed by the King to take control of the Kilpeck estate.

1209 ~  Hugh comes of age, but William de Cantilupe continues to administer the estate. Hugh eventually takes over his estate.

1259 ~ King Henry III grants a weekly Friday market and annual fair to Kilpeck, greatly improving its revenues and growth of the hamlet.

1295 ~ Alan de Plugenet is summoned to Parliament as a Baron.

1299 ~ Alan de Plugenet dies and is succeeded by his son Alan.

1309 ~  King Edward II grants Alan the right to hold a weekly market at Kilpeck as well as a two-day fair twice a year.

1311 ~ Alan Plukenet II is made a Baron at Parliament.

1325 ~ Alan Plukenet II dies without an heir. His sister Joan is married to Edward de Bohun, and so they inherit Kilpeck. At this time Kilpeck is valued at £62 0s 6d - a considerable sum. Edward de Bohun grantes Kilpeck to his brother-in-law, James Butler, Earl of Ormond. However, as the Earls of Ormond live outside of the county, the castle and hamlet are neglected and are allowed to fall into to decay.

1338 ~ The value of the Kilpeck estate upon the death of the Earl of Ormand is valued at just a third of what it was when the Ormands were granted the castle estates.

1349 ~ Poor harvests and the Black Death desimate the population and value of the estate.

1428 ~ Kilpeck has still not recovered, leaving the local priory unable to pay its debts and is dissolved.

1467 ~ Kilpeck remains with the Butlers until the 5th Earl is beheaded.

The estate reverts to the Crown.

King Edward IV grants Kilpeck to Sir William Herbert, 1st Earl of Pembroke, as reward for his services to the House of York.

1469 ~ William Herbert is captured in battle at Edgecote and beheaded for deserting King Edward. King Edward restores Kilpeck to John, the 6th Earl of Ormond. John however later dies in the Holy Land on his way to Jerusalem. He is recorded as being the "goodliest knight and finest gentleman in Christendom".

John's brother Thomas, who is called as a Baron to the English Parliament, succeeds John. His eldest daughter takes Kilpeck as dower to James St. Leger.

1530s ~ Kilpeck is recorded that "sum ruins of the walls still stand".

1635 ~ Although the castle's defences are quite ruinous, it is still garrisoned during English Civil War, but is never attacked.

1646 ~ To ensure that Kilpeck could never again be garrisoned for war, it is slighted. The Kilpeck estate pass to the Pyes of Saddlebow and the Mynde.