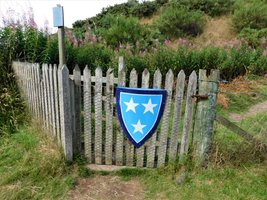 Ormond Castle is situated on top of Lady Hill with wonderful views across the Moray Firth.

Very little stonework remains of this early 13th century castle except for some stone footings, hidden beneath undergrowth. However, aerial shots reveal the outline of the castle and the defensive qualities of this really interesting site, once one of the largest in the Highlands.

Access to the hill is by foot up a farm track. You can park your car with due consideration on the B-road that leads to the farm track entrance, but please note the no parking restrictions opposite this working farm.

1174 ~ King William the Lion of Scotland, of the ruling Canmore dynasty, is knocked off his horse at the Battle of Alnwick in Northumberland and captured by the English. During King William's captivity in Normandy by King Henry II of England, the rival dynasty to the Scottish throne, the king's half-brother from his father's first marriage, Donald MacWilliam, takes the opportunity to rebel and reassert his grip in north Scotland in opposition to King William.

1175 ~ King William is release following agreement to recognise King Henry II of England as his overlord together with payment of £26,000.

1179 ~ King William and his brother David lead a force northward into Easter Ross, establishing two further royal castles, north of the Beaully and Cromarty Firths, including one on the Black Isle, to discourage the Norse Earls of Orkney with their powerful fleet from supporting the MacWilliam rebellion, to whom they are related.

1181 ~ Donald MacWilliam's forces capture the far northern Earldom of Ross. The whole of northern Scotland is now in the hands of the MacWilliam's and the Norse Earls of Orkney.

1186 ~ A band of some sixty men, led by Adam, one of Donald MacWilliam’s sons and outlaw to the King, is pursued by Earl Malcolm of Atholl into Coupar Angus abbey and slain there, despite having claimed sanctuary.

1187 ~ King William the Lion leads a powerful army north to reassert his authority and hunt down Donald, which results in the slaying of Donald in battle, on moorland near Inverness with a force of some 3,000 men. His severed head is brought to King William.

The MacWilliam's cause is left to Donald's son Guthred MacWilliam, who has been exiled to Northern Ireland. The MacWilliam stronghold of Inverness falls to King William. However, the North remains hostile to King William and the Norse Earls of Orkney continue to harass the Kings forces.

The massacre at Coupar Angus and the battle near Inverness resulting in Donald's death, combine to reduce the threat to the Scottish Crown from the hostile North for nearly twenty-five years.

1211 ~ The Ormond's erect a royal enclosure castle, the "Mote of Ormond", near the fishing village of Avoch on a commanding position overlooking the Moray Firth, as a direct result of fresh rebellion in the north by the MacWilliam's led by Guthred.

Guthred, having sailed from Ireland, lands in the far North, causing considerable devastation; "he trod underfoot everything he encountered and plagued many parts of the kingdom of Scotland".

King William appeals to his overlord, King John of England, to bolster his army to counter this new threat. As a result. Guthred's forces are tracked down leading to Guthred being betrayed by his own men, captured and then beheaded at Kincardine Castle by Walter Comyn. His body is hung upside down as a warning to the remaining rebels.

1215~ Guthred's brother Dovenald Ban and Kenneth MacHeth, together with an Irish prince, join forces and invade Moray. However, their joint forces are defeated, not by the King's forces, but by Moray forces led by Farquhar Taggart. He cuts off their heads, presenting them as a gift to King Alexander II of Scotland. He is rewarded with a knighthood and later an Earldom.

1229 ~ Gillescrop MacWilliam leads a fresh rebellion against King Alexander II. Thomas of Thirlestane, a northern lord, is attacked in his castle and killed by "some wicked men of the race of MacWilliam, Inverness is burnt, and some of the King's lands plundered". The King orders William Comyn, Earl of Buchan, to deal with this rebel army. William's victory is rewarded with the Lordship of Badenoch.

In order to finally extinguish the last remaining MacWilliam heir, the King orders the murder of Gillescrop's infant baby daughter by having her brains dashed against the cross in the town of Forfar. The King's "pacification of the North" is completed.

1297 ~ Andrew de Moray & William Wallace become commanders of the Scottish resistance against King Edward I of England. De Moray raises his standard at Ormond Castle to rally his troops for battle. He travels south with loyal supporters and meets up with Wallace. Together they defeat the English at the Battle of Stirling Bridge. Despite this crushing victory over the English for Scottish Independence, Andrew de Moray dies from his wounds shortly after the battle.  Following his death, the castle passes on to the Earls or Ross.

1362 ~ The heiress to de Moray. Joanna of Bothwell, marries Archibald 'the Grim' Douglas, Lord of Galloway. He inherits her estates and titles through right of marriage. Ormond Castle becomes the caput of the Barony of Ormond.

1651 ~ The title of Earl of Ormond is recreated for the elder son of the 1st Marquess of Douglas.

1650's ~ Ormond Castle is destroyed by Oliver Cromwell, in order for him to build his new fortress at Inverness.

1715 ~ Following the Jacobite uprising and defeat at the Battle  of Sheriffmuir, the title of Earl of Ormond becomes extinct upon the death of Archibald Douglas, 3rd Earl of Ormonde, having died of wounds.