1160 ~ Carn Dochan, held by the kings of Powys, becomes an important border fortress against the aggressive princess of Gwynedd. King Madog ap Maredudd of Powys dies at Whittington castle, leaving teh defence of Powys to his son Elise.

1202 ~ Prince Llywelyn the Great of Gwynedd attacks Powys and takes control of the key fortress of Carn Dochan. Elise is forced to retire to the commote of Edeirnon, north of Bala at Rug Castle.

Llywelyn later pushes north east the castle and town of Bala also comes until the control of Gwynedd.

1230 ~ Prince Llywelyn the Great begins the rebuilding and strengthening of the castle to command the important mountain pass between Bala and Dolgellau, important since Roman times.

1281 ~ Prince Llywelyn the Last recovers the castle by swapping Pennant-lliw with Tewdwr's son, Heilyn. Llywelyn later expands and strengthens the castle before he is ambushed and killed the following year, which leads to the end of the war against King Edward I and English domination of Wales.

1283 ~ Kind Edward I of England visits the castle.

The castle is sacked and later demolished.

The plan suggests there was an oval courtyard with a square tower in the centre, and a round tower overlooking the sheer drop to the Lliw valley.

The principle accomodation was provided by a large keep jutting out towards the more vulnerable southern approach. A rock-cut ditch protected this flank of the castle.

Sadly history and tradition are silent about this wonderful ruined castle.

Locating this wonderful ruin is best achieved by parking off a minor track that runs north of the ruin west from Dolhendre towards the forest. You will find a small electricity sub station on your left where there is a gate to a path that runs up the hill towards the castle. Parking is very limited and do be careful not to block any gates on this narrow lane. Once on the steep path keep bearing left and eventually you'll see the outline of the castle ruins above. A spectacular location with wonderful views with plenty to explore. 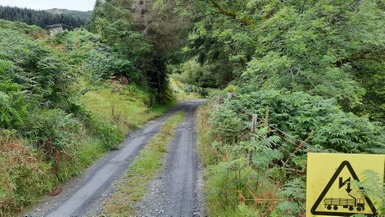