Knucklas Castle is located high above the village with terrific views in all directions.

It is especially clear from aerial photo's, the buried footings of a stone curtain wall around a court yard with round corner towers, and on the west side an outer ward or barbican enclosed by high banks. The rest of the hilltop defended by a palisade.

Access to the castle is accross the small stone bridge and left passthe telephone box down a very narrow dead end track. Follow this track and you will find a wide section of the road beneath the cliff where you can park on the right hand-side. Walk up the track and as you come to the tight right-hand corner, there is a footpath immediately on the corner (photo below). The footpath is quite steep but is in good order, passing through a couple of gates as you climb to the top. 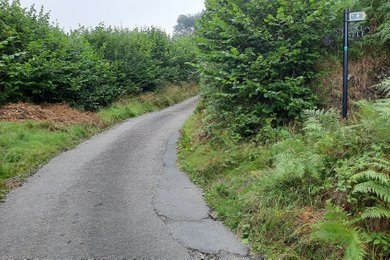 1242 ~ The 11 year old Roger Mortimer, on behalf of his father Ralph, who was out of the country at the time, gives the order to fortify the hilltop.

In addition to being the heir to his father's great estates on the Welsh Borders, through his mother the Welsh Princess Gwladus, he is also grandson of Llywelyn the Great, Prince of Wales and King John of England.

1246 ~ Roger's father dies and as Roger is still a minor, control of Maelienydd with Knucklas Castle is taken over by King Henry III.

1247 ~ The 16 year old Roger persuades King Henry to let him have both his lands and castle back for a substantial fine.

1260 ~ Knucklas castle is by-passed when a Welsh army attack nearby Knighton.

1262 ~ Whilst Roger Mortimer is being besieged by Prince Llywelyn the Last at Cefnllys Castle, Owain ap Madog prepares to attack Knucklas castle with siege engines. The garrison take one look at the preparations and surrender, leaving the victorious Welsh to render the fortifications indefensible. The castle is abandoned.

1282 ~ The castle ruins are repaired and garrisoned for war again in preparation for King Edward I's campaign into Wales against Llywelyn.

1322 ~ King Edward II takes the ruined castle under control of the English Crown.

1402 ~ The Welsh rebel under the leadership of Owain Glyndwr, but by this time the castle is little more than a ruin.

1485 ~ Philip ap Howell, who holds the manor that includes the ruined Knucklas Castle, helps King Henry VII defeat King Richard III, and so secures a King born in Wales to the English throne.