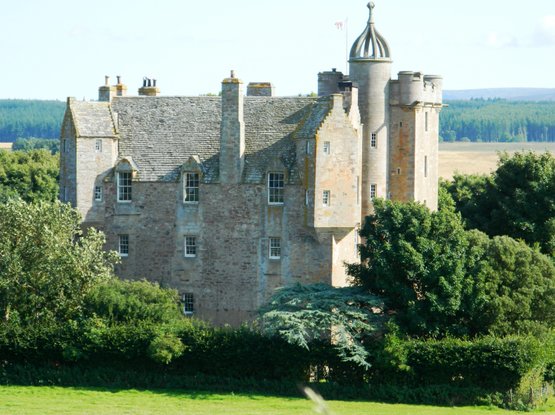 Castle Stuart is an impressive seventeenth-century residential tower house, now set beside the grounds like so many by a gold course, from which you can take photos of the castle.

Unfortunately. you cannot explore this castle as access is restricted.

The lands on which the first half of the seventeenth century castle was built Stuart originally were owned by the Clan Mackintosh.

1561 ~ Shortly after her return from France, Queen Mary Stuart gives the castle to her half-brother, the illegitimate son of King James V, Sir James Stewart.

1565 ~ Sir James strongly opposes the plans to marry Mary with her cousin - Sir Henry Stuart, Lord Darnley. Sir James takes up arms against the Queen, together with Sir Archibald Campbell, 5th Earl of Argyll and almost the whole clan Hamilton. Following defeat Stewart seeks refuge in England. This is however met with reluctance of the English Queen Elizabeth I, cousin the Queen Mary.

In response to a request for an audience, the monarch replies that "not to meet with rebel against his own queen."

1566 ~ He returns to Scotland after the death of Queen Mary's most trusted adviser, her Italian secretary David Rizzio. Rizzio is brutally murdered, receiving 56 blows with a knife, in front of the helpless Queen Mary in Holyrood Palace by a group of Protestant nobles, led by Sir Patrick Ruthven, 3rd Lord Ruthven.

Stewart soon not only receives forgiveness but is in the secret council to take the life of Lord Darnley.

1567 ~ Lord Darnley is murdered. Queen Mary is wedded to one of the main suspects to teh crime, Sir James Hepburn, 4th Earl of Bothwell. Stewart warily remains in France.

A group of Protestant lords join in rebellion against the queen and her new husband. After the Battle of Carnberry Hill rebel troops defeat the army of Queen Mary, commanded by Sir Hepburn. The queen is then imprisoned in the Lochleven Castle. Her husband - the Earl of Bothwell flees to Norway, never to return. The Queen is forced by Sir William Ruthven and Patrick Lindsay, 6th Lord Lindsay to abdicate in favour of his son James, with a Regent appointed during his minority in Sir James Stuart.

During this period construction of the castle begins.

1568 ~ Queen Mary Stuart succeeds in escaping from captivity and gathers an army of 4,000.

This army is defeated by Sir James Stuart at the Battle of Langside.

Following defeat queen Mary flees to England, where she is immediately imprisoned by Queen Elizabeth I.

James Stuart, Earl of Moray, and Regent of Scotland, however, is assassinated by a follower of Mary - James Hamilton. His son is also later brutally murdered, receiving 13 blows with a knife on the orders of Sir George Gordon, 1st Marquis of Huntly.

1625 ~ The construction of Castle Stuart is completed by Stewart's son - Sir James Stuart, 3rd Earl of Moray.  Soon afterwards the castle is attacked and occupied by members of the clan Mackintosh who continually reported claims to the ownership of these lands.

It was only after receiving adequate compensation are the Stuarts allowed to return to castle Stuart.

1745 ~ The Stuarts take part in the Jacobite rebellion to return a Stuart King to the throne.

1746 ~ After the Jacobite defeat at the Battle of Culloden, the decision of the Parliament in London,is to forfeit all titles and possessions, including Castle Stuart to the Crown.

The castle falls into disrepair.