1398 ~ The castle passes from the Stewarts to the Hamilton's.

1403 ~ The English, led by Henry Hotspur of Northumberland and their Scottish Allies the powerful Douglas's, under Archibald the Black, besiege the castle.

However, the siege of Innerwick and its near neighbour Cocklaws Tower, proved to be a mock affair and a smoke screen, for when the Duke of Albany arrives with a large Scots army to save Innerwick. Percy and Douglas had by this time already headed south-west to contact Douglas vassals and march on Shrewsbury. Percy and his men were now in league with Owain Glyndŵr of Wales in  open revolt against King Henry IV of England. But at the battle of Shrewsbury later the same year Percy is killed, Douglas retaken captive, and the rebels soundly defeated.

1547 ~ Innerwick is attacked by the English during King Henry VIII's wars of the “Rough Wooing”, in order to force the child Mary Queen of Scots be married to the English Prince Edward. One English force attacke Thornton Castle, directly across the ravine from Innerwick. A separate English unit of musketeers besieged Innerwick itself.

The Master of Hamilton and eight other men barricaded the doors and defend the castle from the battlements. Part of the castle is set ablaze, and the English enter by storming the defences, killing eight of the defenders on the spot, the ninth deciding to jump from the castle battlements, falling some 70 feet into the ravine and river below. The English commander conducting the siege of Innerwick is so impressed by this feat of daring that he calls for the man’s life to be spared. However, as the Scot scrambled along the river bed he is shot dead by the other English force attacking Thornton Castle. Following this Thornton Castle is demolished and Innerwick dismantled.

1548 ~ The Scots return and once again hold the castle against the English.

1598 ~ Despite the extensive damage inflicted on the castle by the English fifty years earlier, enough of the castle remains stubbornly intact for Sir Alexander Hamilton to hold the castle for the Scots.

1650's ~ The Maxwell's now in control of Innerick Castle, together with the nearby bases of Dirleton & Tantallon Castles, attack Cromwell's lines of communication and supplies.

1663 ~ James Maxwell of Innerick becomes Earl of Dirleton by the time Innerick Castle is sold to the Nisbets. Years of English attacks and dismantling of the castle's defences have proved too much for Innerwick which gradually falls into complete ruin, eventually being used as a local quarry for its stone work. 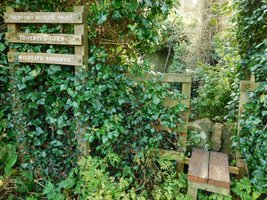 Innerwick Castle is a 15th century tower and courtyard castle built onto and into a rocky crag above the Thorton Burn. Although ruinous now, there remains surprisingly plenty to explore with care. A fabulous location as its walls literally rise out of the living rock beautifully framed with trees and bushes.

It can be easily reached from the road where there is a small path signposted Thornton Glen Wildlife Reserve. After a few yards there is another signpost to the castle, a path that takes you along the top of the burn until it comes into view.

Please be aware that the castle is on Private land and permission should be sought before exploring the ruin.

The masonry is crumbling in several places so extreme care should be taken. 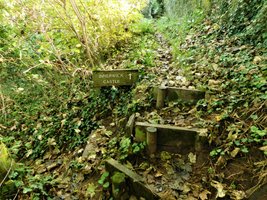