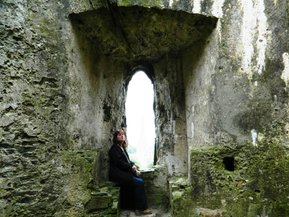 Kidwelly Castle stands at the head of the wide estuary of the River Gwendraeth overlooking a flat expanse of marsh, at the limit of tidal water. Situated on a prominent ridge, it could be supplied by sea, and formed part of a chain of new castles controlling a major coastal route. Together with Llanstephan Castle on the west of the Towy estuary, Kidwelly flanked the important town of Carmarthen.

Like most castles of its day, Kidwelly was originally built of earth and timber and was taken and re-taken several times before King Edward I pacified south-west Wales in the late thirteenth century, when it was eventually re-built in stone.

Certainly one of the finest castles in all of South Wales.

1106 - King Henry I's powerful justiciar, the powerful Bishop Roger of Salisbury, builds himself a timber castle and town at Kidwelly.

1136 - Maurice de Londres, whose father had founded Ogmore Castle, defeats and kills Gwenllian, wife of Gruffudd ap Rhys, lord of the principality of Deheubarth, in a battle outside Kidwelly.

1139 - The downfall of Bishop Roger of Salisbury see's Kidwelly Castle fall into the hands of Maurice de Londres.

1215 - The castle is again burnt and attacked by the Welsh, this time by one of the Lord Rhys's sons, Rhys Grug, during Llywelyn the Great's attack on south Wales.

1220 - Llywelyn, having agreed terms with the English, forces the Lord Rhys to hand Kidwelly back to the English.

1244 - The male line of the de Londres family dies out, and the estates pass by marriage firstly to Walter de Braose and eventually to the de Chaworth family.

1257 - The timber castle now strengthened considerably, is again attacked during a Welsh uprising but this time is not taken. However, during the campaign Patrick de Chaworth is killed and the town damaged by fire.

1270 - Pain de Chaworth, who has returned from crusade with Kind Edward I, begins rebuilding Kidwelly in stone.

1277 - Pain becomes Edward's commander-in-chief during the war against Llywelyn the Last, Prince of Wales.

1291 - The hand of Matilda, Patrick's infant daughter and heiress to Kidwelly, is granted in marriage by King Edward I to Henry, the second son of Edmund, Earl of Lancaster, although the ceremony does not take place until 1298.

1361 - Henry's son and successor dies without an heir. The castle is granted to Blanche, the wife of John of Gaunt, who later becomes duke of Lancaster, and on the accession of their son, Henry as the first Lancastrian King of England, passes into the hands of the Crown.

1403 - Kidwelly withstands an attack by Owain Glyndwr's army, under the leadership of a local Welshman, Henry Dwnn, despite help from French auxiliaries in burning one of the gatehouses. The castle withstands assault for three weeks until an English army arrives to relieve the defenders. Owain returns a couple of years later but is again denied the castle.

1485 - The Castle is granted by Kin Henry VII to Sir Rhys ap Thomas as part of his reward for helping Henry to secure the throne at the Battle of Bosworth Field. Further building work is undertaken at the castle.

1531 - Rhys's grandson, Rhys ap Gruffudd, is tried and executed for high treason. The castle reverts once more to the Crown.

1609 - Although the Kings judicial court still sits at Kidwelly, the castle is described as 'utterly ruyned and decayed'.

1630 - The Castle is acquired by the Vaughan family from nearby Llandeilo. In the run up to the Civil War the castle is considered obsolete and is later abandoned for good.