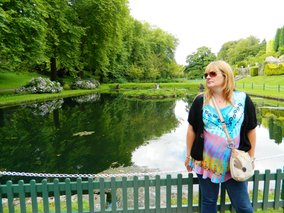 St Fagan's Castle has to be one of the most beautiful fortified mansions that we have ever visited.

Elizabethian in style, it is set out among the most amazing Italian inspired gardens. Truly breathtaking and well worth a visit.

1091 ~ The Norman Peter le Sore raises a ringwork castle here after dispossessing the Welsh lord Meurig ap Hywell. St Fagans' castle would be the first thing people are confronted with as they try to cross the River Ely.

1300's ~ The castle passes to the le Vele family by marriage.

1475 ~ The crumbling castle passes to David Mathew when he marries Alice le Vele.

1560's ~ The descendants of their daughters sell the castle to Dr John Gibbon, who builds himself a fine mansion. Very little now remains of the orignal castle.

1584 ~ Sir Nicholas Herbert of Cogan Pill purchases the castle and laids out the outer court to the north.

1616 ~ Due to lack of funds, the castle is sold to Sir Edward Lewis of The Van, near Caerphilly, and so becomes the chief Lewis residence.

1648 ~ King Charles I has been defeated and Colonel Thomas Horton is marching on to Cardiff, with the intention of taking the town.

Once camp has been set up, he awaits for reinforcement from Oliver Cromwell's troops.  The Royalists, led by Major-General Rowland Laugharne, plan to seize Cardiff Castle before Horton has chance to take it.

Laugharne launches his attack, but is driven back by Parliamentarian cavalry.  The 3,000 roundhead soldiers are better trained and better equipped than the 8,000 strong Royalists army.

Laugharne is injured and his troops are eventually forced to make a hasty retreat.  Nearly 700 people are killed on that day, with 65 people of those from St. Fagans.

Horton takes thousands of prisoners and thus ended the most important battle in Wales of the Civil Wars between the Crown and Parliament.

It is said that a nearby brook that runs through the estate into the River Ely, turned red with blood.

1730 ~ The Windsor 3rd earl of Plymouth marries the heiress of Elizabeth Lewis.

1815 ~ The buildings are neglected and used only by a farmer.