1250's - Llywelyn the Last, in common cause with the English barons opposed to King Henry III, recovers large swathes of land in North Wales.

1267 - Exhausted by repeated domestic difficulties with his barons and Llywelyn, King Henry III concludes peace under the Treaty of Montgomery, in which Llywelyn is recognised as the effective ruler of Wales and with this the title of Prince of Wales.

1272 - Henry III dies. His son and heir succeeds as King Edward I, whilst he is away on crusade.

1273 - Llywelyn fails to swear fealty to the new king, and is absent at the king's formal coronation the following year.

1274-76 - Llywelyn fails to answer five summonses to do homage to King Edward as his Lord. In August 1275 Edward journeys all the way to Chester, only for Llywelyn to fail to turn up to perform homage. In November 1276 Edward's patience gives out and he declares his intention to go against Llywelyn 'as a rebel and disturber of the peace'. Preparations are made for war.

1277 - In the month of July Edward begins 'combined operations' against prince Llywelyn, setting up a fortified beach-head at Flint for the invasion of Gwynedd. With up to 15,600 troops engaged in the royal force at its peak, within months Llywelyn's power is restricted to the heart of Snowdonia and the island of Anglesey. On 21st July an army of soldiers and woodcutters arrive at Flint, a site selected because of its location along the ancient Roman road from Chester and because of its accessibility to sea-going ships. By August the work force had increased to almost 3,000 diggers, masons, woodcutters and carpenters.

1282 - On Palm Sunday Llywelyn the Last's troublesome brother, Dafydd, sparks off a major Welsh revolt, attacking the castles of Rhuddlan and Hawarden. The town of Flint is burnt and the castle building severely interrupted. Llywelyn has little option but to join and lead the revolt. King Edward is outraged, and makes clear his intention 'to put an end finally to the matter...of putting down the malice of the Welsh'. On 11th December Llywelyn is killed in  skirmish, effectively bringing an end to the war. Dafydd becomes a fugitive and is hunted down, captured and executed before the King. Repairs are made to the fire damage of Flint castle.

1294 - A further Welsh revolt tests the completed castle. Its constable burns the town to deny shelter and provisions to besieging Welsh army.

1399 - King Richard II, upon his return from Ireland, arrives at Flint castle. On the 14th August 'having heard Mass, he went upon the walls of the castle, which are large and wide on the inside, and beheld the duke of Lancaster as he came along the seashore with all his host.' Richard is taken to London where he seals a deed of abdication to the duke, now King Henry IV. Richard is eventually taken to Pontefract castle in Yorkshire and murdered.

1642 - Flint castle is repaired and garrisoned by local Royalists. A year later the castle is surrendered after a siege, but is recovered by Royalist troops landing from Ireland.

1645 - The castle is retaken for Parliament and then, in turn, once more for the king.

1646 - After the fall of Chester, Parliamentary forces lay siege to Flint for three months. The castle is surrendered on honourable terms in August 1646.

1647 - The Parliamentary garrison is removed and the castle slighted.

1652 - The castle is described as almost buried in its own ruins. A new gaol is built in the corner of the castle. 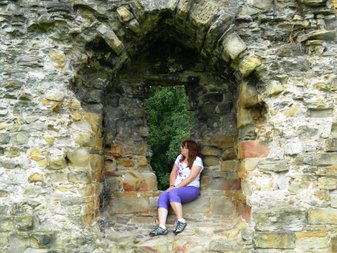 Flint was the first of the castles built by King Edward I during his Welsh campaigns. An enormous workforce of 2,300 labourers, who were paid handsomely, since building a castle in hostile land was not popular work.

Situated on the Dee estuary, in medieval times the waters came right up to the castle walls.

Today the castle is easily accessible from the road and car park as short walk away. The best view of the castle is however from the marshy flat land that lays towards the waters edge.