1268 ~ Gilbert commences the building of Caerphilly castle, one of the largest building programs ever attempted in the country.

1284 ~ Llangibby is granted by Gilbert to his brother Bogo de Clare, chancellor of Llandaff Bishops Palace, and treasurer of York.

It then passes to Gilbert’s widow, Joan of Acre, daughter of King Edward I.

1295 ~ Madog ap Llywelyn Welsh army attack Llangibby castle as part of a wider Welsh uprising against the English. The outer walls are breached and parts of the castle burnt.

1301 ~ Payment of 43s 3d is made for the repair and rebuilding of ‘a certain tower burnt by the war’. A mason is also employed to repair the breached wall.

1305 ~ More extensive repairs are carried out to the domestic buildings in the castle. Repairs were made to the roof of the hall, the timberwork of the stable, bakehouse and kitchen.

1307 ~ Joan dies and so Llangibby passes to her son Gilbert III de Clare, who is now old enough to succeed her.

The building of the great gate house begins.

1314 ~ After Gilbert’s death at the Battle of Bannockburn fighting the Scots, Llangibby comes into the hands of his widow, the Countess Matilda. The great gatehouse is now complete.

1315 ~ The castle is again attacked with further damage made to the curtain walls.

1316 ~ The Welsh under lord Llewelyn Bren attack the castle, along with other castles belonging to the de Clares.

Further repairs are made to the castle and its garrison increased.

1318 ~ The building of the residential Lord's Tower is now complete.

1320 ~ Following Matilda's death the castle then passes into the possession of Elizabeth de Burgh, sister and heir of Earl Gilbert III, and her husband Roger Dammory.

1341 ~ A range of new lodgings are built by Elizabeth de Burgh.

1640's ~ The castle defences are reused in the Civil War, with extensive earthwork landscaping.

1645 ~ The Royalist diarist and antiquary Richard Symonds describes Llangibby as ‘strong and inhabited and fortified’ with a garrison of sixty men’.

1648 ~ The west tower is blown up with gunpowder on the orders of Parliament to slight the castle to make it indefensible for future Royalist use. 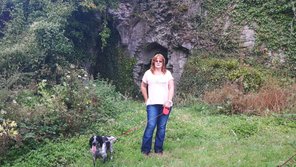 Llangybi Castle,formerly known as Tregrug, occupies a wooded plateau above the village. The single fortified enclosing wall encircles the entire plateau, being 540 feet long and 270 feet at its widest point.

There is also a massive Edwardian gatehouse. In summary, this place is massive.

We first heard of this castle from the BBC Time Team visiting the site some years ago and set about looking up where this massive forgotten castle was.

The original motte and bailey castle was set behing castle farm just off the main road, albeit nothing now remains. From the main road with its impressive entrance up a long driveway into the estate, you will arrive at a number of buildings belonging to the estate management and owners. As this site is on private land you must seek permission first.

We were absolutely delighted to be allowed to explore the ruins but nothing could prepare us for what we found. How such a massive castle could remain hidden from the world is a wonder in itself.

A walk round the ruins you soon get a feel of the scale of the place.

The much ruined overgrown gatehouse must be comparable to the one at Caerphilly Castle. There are also some beautifully carved features in some of the towers and domestic buildings.

If you are  fortunate to be allowed access to this very special castle, do take care and give due consideration to the permission granted by the kind owners. A sensational 'castle-finder' discovery if you are very lucky.