Pencoed Castle is derived from the Welsh meaning "head of the wood". The castle stands among 370 acres of rolling farmland and countryside.

The Castle itself is a fortified Tudor manor house built by Sir Thomas Morgan during the first quarter of the 16th Century on the site of a moated Norman castle.

The remains of the outer walls are still intact. The tower still existing at the southwest corner of the courtyard is probably one of the towers of the original castle. The inner portion of the castle is a stone manor house with battlements at the top of the walls. The interior of the castle currently lies in a state of disrepair and is ruined. Nevertheless, this small castle has to be one of the most beautiful we have visited in all of Wales.

The Castle now has new owners with a gate erected at the end of the long driveway to prevent would be visitors to the castle, which is also their family home. Access is therefore understandably strictly private.

The gatehouse is probably the most impressive part of the castle and with expressed permission, you can explore the castle grounds, which are quite fascinating. It is clear that the main hall of the castle is being renovated so please do ensure you seek permission in advance from the owners.

1270 ~ A moated castle is recorded as being owned by Sir Richard de la More.

1400's ~ The Morgans of Tredegar take possession of the castle. Their family are descended from Morgan ap Llywelyn.

1490's ~ Following the end of the Wars of the Roses and the Welsh having backed the winning side, Sir Thomas Morgan builds a new mansion on the east side and a gatehouse on the west side of the castle. Much of the original Norman stonework is used in its construction. 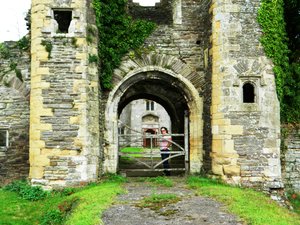