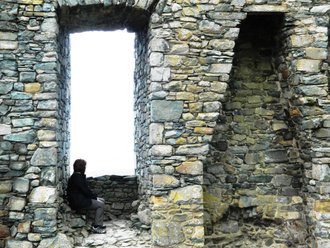 With the mountains of Snowdon as its backdrop and the sea not far from its foot, Harlech's spectacular location has made it one of the most photographed in the British Isles.

But not only has it an unsurpassed natural setting; as a piece of castle-building Harlech is also unrivalled. It is a magnificent structure just seven years in the creation from an architect genius and has survived seven centuries as a sentinel overlooking Tremadoc Bay.

Harlech castle is quite possibly the perfect castle and an absolutle must to anyone who is interested in castles.

There is a small carpark immediately in front of the castle which was once part of the moat.

1283 - Six months after the death of the first and last prince of all Wales, Llywelyn in December 1282,  and the subsequent fall of free Wales to King Edward I's forces, Sir Otto de Grandison's central army arrives at Harlech and immediately beings work on a new castle.

1286 - During the summer months work on the new castle reaches its height with nearly 950 men from all over Britain working on site.

1289 - The castle is completed and is soon handed over to its creator and architect Master James of St.George who is appointed constable, 'together with 30 fencible men of whom 10 shall be crossbow-men', one chaplain and other retainers to maintain the castle.

1294 - With the Welsh uprising under Madog ap Llywelyn, Harlech is completely cut off by land and has to rely on supplies from Ireland by sea, but the thirty-seven men successfully hold out against the welsh forces that had already wrecked havoc at Caernarfon.

1404 - With the whole of Wales in revolt under the leadership of Owain Glyndwr, his forces surround Harlech and settle down to besiege the garrison into starvation as the castle had proven too impregnable to open assault. For months Owain's forces control every road to the castle and watch every entrance. The sea is patrolled by Owain's French allies. Inside, provisions begin to run out and then an outbreak of disease. Some defenders try to escape under cover of darkness but are caught and put to death. Finally, with no hope of relief the garrison surrender. Owain moves his family into the castle and sets up a Welsh parliament where he is later crowned as prince of Wales in the presence of envoys from Scotland, France and Spain. From his headquarters at Harlech he continues his campaign against the English.

1407 - The English besiege Harlech castle without success. Prince Henry besieges Aberystwyth Castle for a year before taking it.

1409 - King Henry IV sends a strong force under Gilbert Talbot to retake Harlech. After a long siege and persistent bombardment from English canon the castle falls to Harry of Monmouth, prince of Wales and future King Henry V and victor of Agincourt. Owain's wife and four children are taken but the great Welshman had already slipped away. The fall of Harlech marks the turning point and fall of the Welsh uprising.

1460 - A period of comparative peace is brought to an end by the Wars of the Roses. The castle is held by Lancastrian forces and endures a siege which lasts seven years. The constable, Dafydd ap Ieuan, and his garrison hold out long after other Lancastrian commanders in England and Wales have surrendered to the Yorkist faction and Alan Reid tells the following story. "Dafydd ... widened his fame by replying to one summons to surrender with the boast that he had once held a castle in France so long against siege that all the old women of Wales talked of it; and now he would hold a castle in Wales until all the old women of France talked of it."

Eventually famine forces surrender and Dafydd hands the castle to Lord Herbert and his brother Sir Richard Herbert on honourable terms. King Edward IV at first refuses to honour the terms of the settlement but Sir Richard Herbert, out of respect for the bravery of the defenders, offers his own life in exchange for Dafydd's rather than see his promise broken. The 'men of Harlech' begin their place in welsh folklore with their deeds being passed down through generations in song.

1539 - Crown surveyors declare that Conwy, Caernarfon and Harlech, in the event of invasion by the French or Scots, incapable of being defended for more than an hour.

1564 - Another survey reports the internal of nearly every tower in the castle to be 'in utter ruin' and the drawbridge 'in greate decaye'.

1647 - Harlech is defended for King Charles I by its constable Colonel William Owen of Brogyntyn. Following a lengthy siege the surviving garrison of 14 gentlemen and 28 common soldiers finally surrender to the besieging Parliament force under Colonel Mytton. Harlech is the last castle of all to be lost and its fall signals the end of the Civil War. The castle is later slighted but orders for its demolition are not carried through. Harlech is left to slowly decay.