AD 122 ~ The building of Hadrian's wall begins in the Roman province of Britannia.

AD124 ~ The auxiliary fort to Hadrian's wall is built to the north of the civil settlement of vicus. The garrison consists of auxiliary infantry and a detachment of legionaries from Legio II Augusta.

AD409 ~ The Romans withdraw from the wall.

1604 ~ Hugh Nixon, "Stealer of cattle and receiver of stolen goods", becomes the tenant of Housesteads farm.

1663 ~ Housesteads is the home of the Armstrongs, a notorious family of Border Reivers.

1692 ~ Nicholas Armstrong buys the farm, only to have to sell it again in two years later to Thomas Gibson of Hexham for the sum of £485. They however remain as tenants. They have a reputation as well-known band of horse thieves and cattle rustlers who use the old fort as a place to hold their stolen horses and cattle.

They trade as far afield as Aberdeen and the south of England.

At one time every male member of the family was said to have been a 'broken man', formally outlawed by English or Scottish authorities.

1704 ~ Nicholas is hanged and his brothers flee to America. 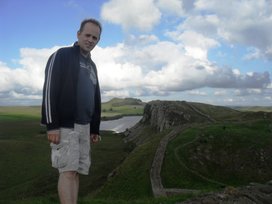 Although Housesteads is technically not a castle, our castle-finding in the beautiful Northumberland hills led us to Steel Rigg, upon which part of Hadrian's Wall stands and nearby Housestead Roman Fort, set high on a dramatic ridge Housesteads is the best preserved of all the Roman forts along Hadrian’s Wall.

Hadrian’s Wall itself runs across the north side of the Fort from where there are dramatic views across the stunning Northumberland landscape, unchanged for some 2,000 years since Roman troops looked out at the same spot.

We recommend that you don't just make for Housesteads, but also take in nearby Steel Rigg where you can walk along Hadrian's wall. Again there is a dedicated car park with a short walk.

A visit to Housesteads is an absolute must and is a reasonably easy walk from where there is ample parking.