1779 ~ The western heights that overlook the critically important town and harbour of Dover, with its castle dominating the eastern heights, is given defensive earthworks to counter the imminent invasion by the French.

1796 ~ French attempts to invade Ireland are made in order to destabilise Britain and provide a potential stepping-stone for invasion.

1798 ~ A French Army is assembled on the Channel coastline, but an invasion of Britain is sidelined by Napoleon's concentration on campaigns in Egypt and against Austria.

1802 ~ Napoleon's plans to invade Britain are shelved by the Peace of Amiens.

1803 ~ Upon the outbreak of war further preparations are made to invade Britain. Within two years the invasion plans are again shelved. A new French army of 200,000 men is gathered and trained at camps at Boulogne, Bruges and Montreuil. Invasion barges are built in Channel ports along the coasts of France and occupied Holland.

These preparations are financed by France ceding her huge North American territories to the United States in return for a payment of 50 million French francs. The entire amount is spent on the projected invasion of Britain. The United States partly funds the purchase by means of a loan from Baring Brothers, a British bank.

1805 ~ The sea Battle of Trafalgar between Britain's Royal Navy against the combined French and Spannish armada results in a resounding victory for the British and an end to any invasion plans.

1804 ~ Lieutenant Colonel William Twiss is instructed to modernise the earthwork defences as part of a huge program of fortifying the English coastline against Napoleon.

In addition to the fortified citidel, Twiss also builds the Grand Shaft staircase which enables the 200 troops barrocked at Drop Redoubt 180 feet upon the shoreline, to be deployed quickly to the harbour and support the troops barracked in Dover Castle.

1859 ~ The rise of Napoleon III causes another invasion scare.

A Royal Commission is set up to assess the defences of Britain. As a result, more building work and defensive improvements are deemed necessary at the citidel.

1893 ~ The garrison at the citidel is reduced to just 90 in response to the reduced threat on the English coastline.

Drop Redoubt is a much forgotten and hidden Napoleonic citidel that even today is still a formidable fortification, with its massive walls, bombproof casemates and the caponiers providing excellent means of defence.  Surrounding the Drop Redoubt is a dry ditch system over which the caponiers would have provided fire against any enemy infiltration,  similar purpose to mediaeval moats.

The artillery at Drop Redoubt faced mostly inland, so as to ensure the Harbour and Castle defences could not be outflanked from an invading force attempting to capture Dover from the rear.

During World War II, Drop Redoubt housed a squad of commandos that, in the event of invasion, would have been responsible for destroying Dover Harbour. Their presence was secret and the lines around the Redoubt were mined.

The entrance to Drop Redoubt was via a bridge. The inner third of this was pivoted so that the Redoubt could be isolated. The pivot and the recess into which the bridge swung can still be seen, although the bridge has long since gone.

Access to the citidel from the approach into Dover from the M20 is via citidel road that climbs high up into the cliffs to a park where there is a car park, within a short stroll to the tunnelled citidel entrance. When this is open you can walk round the dry moat that surrounds the citidel. Alternatively you can climb the steep steps that take you around the top of the dry moat where you can both look down and across at the defences, as well as across to Dover Castle and the harbour below.

A fascinating place to visit. 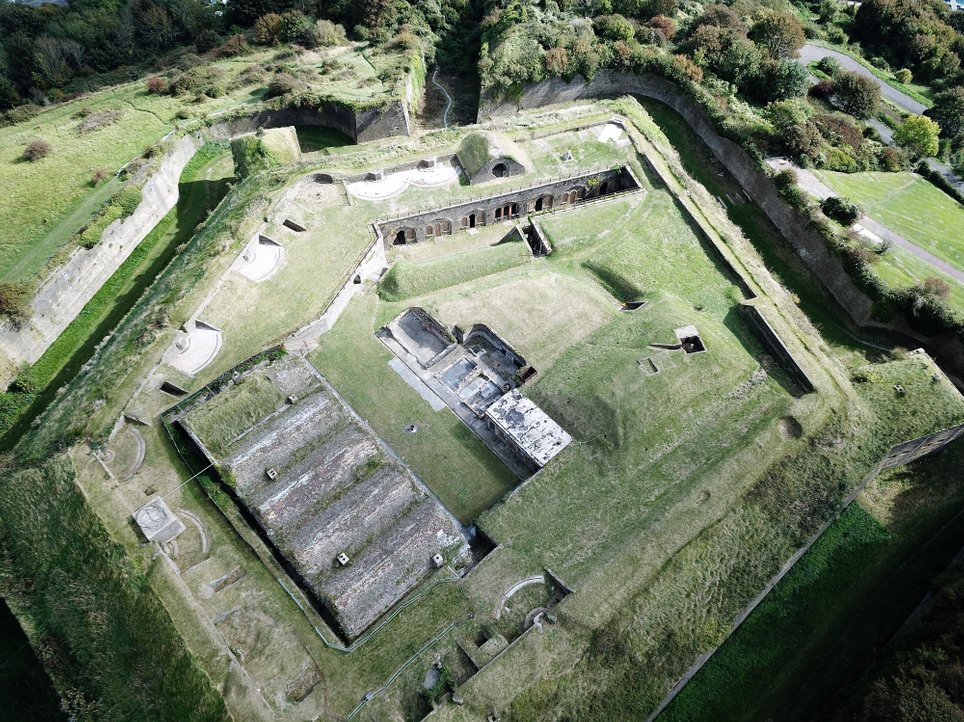