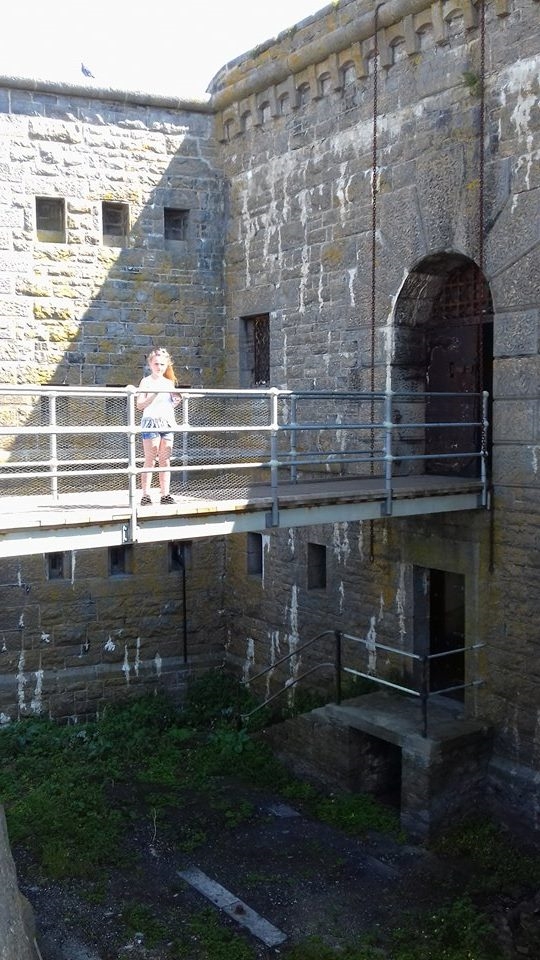 St Catherine's Fort was as a welcomed surprise upon arriving at the holiday sands at Tenby. Set upon a rock that rises up from the sands, set against the backdrop of the sea and overlooking the tiny remains of Tenby Castle, set upon the mainland, this fort is well worth a visit.

Access to the castle can only be made at low tide acoss the marvelous sands, up roughly carved stone steps.

The site was opened to the public for the first time in 36 years in 2015. Unfortunately the fort was closed shortly following our visit in August 2016 and we hope the trust find a way of re-opening the site soon.

1066 ~ A small castle is reported to occupy the island in Tenby Bay.

Sometime later St Catherine’s Island is established as a place of Christian worship by the creation of a small chapel built on the promontory of the island.

1856 ~ Ownership passes to the Corporation of Tenby which takes possession of a number of crown lands. It is recorded that a few sheep inhabit the island.

1797 ~ 1400 French troops land at Carreg West Point. The Legion Noire, from the colour of their uniforms, consisted of 600 Soldiers and 800 convicts. Led by William Tate, a fanatical Irish American with a hatred of Britain, he works under orders to create a revolutionary spark which could bring down William Pitt and the British government. Clearly Short of provisions the French raid farm houses before being faced by Lord Cadaw and his hastily mustered force. Resistance ensued but resulted in quick surrender and a march of 505 prisoners from to Milford Haven.

1866 ~ The protection of Tenby and its importance as a landing site for Milford Haven and the Royal Dock Yard at  Pembroke Dock is considered of vital importance. The construction of the The fort is ordered as a direct result and the island is sold to the War Office for £800. A line of coast forts or batteries along the Pembrokeshire coasts is recommended but in the event only St Catherine’s fort is built protecting the main landing and access zone.