Spynie Palace is every inch a castle of some importance. In place of a laird or baron, its owners were the Bishops of Moray, who entertained Kings and Earls and were an influence to be reckoned with.

The Palace is fairly well sign-posted with a short walk from the parking provided along the country lane leading the to ruin.

1208 ~ Bishop Brice chooses Spynie church as the site for his cathedral, being conveniently located and also difficult for lawless groups to attack the church undetected, being beside a large open sea loch.

1224 ~ The cathedral is transferred to Elgin, where it is better protected by the royal castle and closer to the market and town. The bishop's principle residence however remains at Spynie.

1362 ~ Bishop John welcomes King David II to 'the castle of Spynie' as the royal court flee the Black Death that has overcome Edinburgh.

Later the same year the Bishop becomes another victim of the plague.

1390 ~ The despairing Bishop turns to Thomas Dunbar, son of the Earl of Moray for protection against Alexander Stewart's tightening grip. Alexander's infamous ruthlessness has awarded him the the name 'Wold of Badenoch'. Incensed by the Bishop's actions he unleashes his lawless bands of 'wyld wykkyd Heland-men' on Elgin.

They burn and ramsack the town and cathedral.

King Robert III orders his younger brother 'not to interfere in any part with the castle of Spynie'.

1397 ~ Upon the death of the bishop, King Robert III places Spynie into the care of his ruthless brother.

1398 ~ Following the appointment of Bishop William to the vacant position, King Robert orders his brother to hand over the church lands, including Spynie Castle.

1505 ~ King James IV returns to stays at the castle whilst on pilgrimage.

1562 ~ Mary, Queen of Scots, arrives at Spynie Castle with her forces on route to 'clip the wings' of George Gordon, 4th Earl of Huntly, who is known as 'Cock o the North', for his unrivalled wealth and power in the North of Scotland.

After her forces are fed and rested at the castle, they march against Gordon's forces, defeating them at the Battle of Corrichie, near Huntly Castle.

1576 ~ Mary's third husband, James Hepburn, 4th Earl of Bothwell, following her capture at Carberry Hill, is forced to flee north to the safety of hus uncle's palace at Spynie. However, a plot is hatched at the palace to murder the unpopular Earl.

He discovers the plot and has one of the bishop's sons killed and has the palace guards replaced with his own loyal men. The political situation however worsens with his enemies closing in on all sides, so he is forced again the leave, for the remote Isles of Orkney, from which he again flees to Norway and then Denmark, where his later dies in exile.

1587 ~ Following the reformation in Scotland, the Crown seize the Catholic Bishop lands including Spynie Palace, but allow Bishop George to remain living at the Palace until his death two years later.

Later the same year Mary's son, King James VI, stays twice at the palace on his way to and from a hunting expedition.

1602 ~ The chief minister of the Elgin parish, Alexander Douglas, is appointed bishop of Moray and with it a seat at Parliament.

1607 ~ Alexander is permitted to reside at the palace.

1611 ~ Alexander is formally consecrated as bishop.

1638 ~ The National Covenant is signed at Edinburgh, deposing all Bishops of their titles and powers, in conflict to the will of King Charles I. This includes Bishop John Guthrie of Moray. Seeing this likely turn of events he has 'his houses of Spynie with all necessarie provisioun, men and meit, ammunition, pulder and ball, as he fairsaw gryt trubles to follow'.

1639 ~ Bishop John is debarred from preaching in Elgin but he is left in peace at Spynie whilst the rest of the country is torn apart by religious warfare.

1640 ~ The Bishop is accused of preaching a sermon at Spynie, and continues to refuse to sign the Covenant. A force of 800 Covanters are sent to bring the Bishop to heel. He is forced into surrender at Spynie Palace. His armaments are removed but he is allowed to continue to reside at the palace with his wife and female servants.

Later the same year he is accused of wicked offences such as selling pardons, conducting baptisms and taking part in dances. He is arrested and imprisoned.

1642 ~ The Bishops furniture is shipped to Dundee and later the same year his wife follows. He is freed from prison and allowed to retire to his family estates where he dies the following year.

1662 ~ Following King Charles II restoration, church rule by the Bishops is restored. The minister of Elgin, Murdo Mackenzie, is consecrated as Bishop Moray. Parliament grant £1,000 for the repair of Spynie Palace, but he makes clear that this vast sum is far too little to make the palace habitable once more.

1689 ~ Parliament pass two acts to finally demolish Bishop rule over the Church. Bishop William Hay of Moray, who had been installed only the year previously, is deposed and removed from his charge of Elgin parish,and with it the end to Spynie's 500 year history as residence of the bishops of Moray. The palace quickly falls into disrepair and ruin. 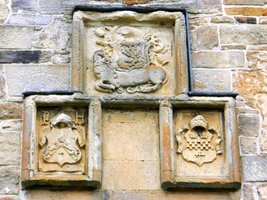 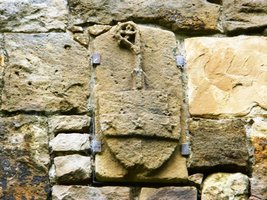