1160 ~ Somerled, King of Man and the Hebrides, grants the land of Saddell for the building of a monastery, 'Lord Sorlius Maderdi, ruler of Kintyre, founded there the monastery of Sandal'.

1163 ~ The building of Saddell Abbey begins.

1164 ~ Somerled is killed in the Battle of Renfew against the Scots.

1165 ~ Ranald, Somerled's son ensures the building of the Abbey at Saddell continues to his father's wishes.

1263 ~ Upon the great Norse fleet of Haakon, King of Norway, appears off the island of Gigha, the Abbot of Saddell, asking for protection, is granted it in writing by the King.

1266 ~ The Battle of Largs between King Haakon and King Alexander III of Scotland ends in a bloody stalemate but following a great storm and retreat from the Scottish mainland, Norse control over the Western Isles is greatly reduced. Upon his return home to Norway King Haakon dies whilst at anchor in the Orkney Islands.

1306 ~ Robert the Bruce who is a hunted man on the run from his enemies, lands north of Saddell to seek help from Angus MacDonald, son of the Lord of the Isles. Angus provides shelter, food and an escape plan for the future King of Scotland. Saddell Castle is deemed too close to hostile clans who remain loyal to the rival Balliol and Comyn cause, including the nearby stronghold of Castle Sween. Bruce and the remnants of his loyal following are quickly ushered to the safer fortress of Dunaverty Castle, on the most southerly point on Kintyre and closest point to Ireland, should an escape from Scotland be their final option.

Shortly after arriving at Dunaverty word reaches Angus that English ships are closing in to lay siege to the castle, and so Bruce is hastily smuggled aboard loyal MacRuari galleys to the safer reaches of the island of Rathlin, off the coast of Ireland.

1507 ~ As part of King James IV vendetta against the MacDonald's, he influences the lands of Saddell to become part of a barony to be held by his bishop in the troublesome Argyll.

1512 ~ The building of Saddell castle is completed by David Hamilton, Bishop of Argyll, using the stones of the ruined Saddell Abbey.

Later, The Earl of Arran is forced to exchange it with the Chief of Clan MacDonald of Dunnyveg, James MacDonald in exchange for James's lands on the Isle of Arran. The Castle then becomes one of several ancestral homes of the MacDonald family.

1558 ~ The castle is captured by Thomas Radclyffe, 3rd Earl of Sussex, Lord Deputy of Ireland under orders of Queen Mary I of England. The capture is in retaliation of James MacDonald's involvement in Ireland against the English Crown.

Saddell castle is later rebuilt by successive MacDonald Lords, and it is enlarged together with a trap door in the main entrance passage, which upon activation, sends unwanted visitors into a dungeon.

1607 ~ The Clan Donald lands in Kintyre, including Saddell, are forfeited upon the orders of King James VI to Archibald Campbell, 7th Earl of Argyll, and clan rivals to the deposed MacDonalds.

1774 ~ Upon the building of Saddell House the castle falls into disrepair.

Saddell Castle is a historically important 16th-century castle on the shore of the Kilbrannan Sound in Kintyre. The Castle originally served as a bastion of the MacDonald family for several centuries. The tower house was built near the abbey founded by and once housed the remains of Somerled, the progenitor of the MacDonald clan. Several MacDonald Lords have resided at Saddell over the centuries, once giving refuge to Robert the Bruce for more than a year during Scottish War of Independence.

Today the castle is better known for being the backdrop to Paul MacCartney's Wings hit single, Mull of Kintyre, and is a castle you can hire to stay.

The castle is quite easy to miss from the road, as we did. Heading south after you pass the signposts for Saddell Abbey and cross the bridge, near a bend in the road look for a track that takes you to a small private parking area. Here with consideration, you are allowed to park and take the pleasant walk along the tree-lined lane towards the castle and wonderful beach.

Make sure you take in Saddell Abbey during your visit as this is of critical importance in the history of Argyll and Clan MacDonald, Lord of the Isles. The ruined Abbey also houses spectacular Highland tomb stones similar to those found at Kilmory Chapel near Castle Sween, and of course those found at Iona Abbey where they were carved.

A wander along the beach at Saddell to view the castle followed exploring the Abbey makes for a fabulous day out. 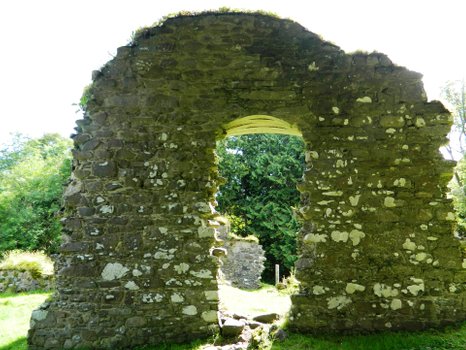 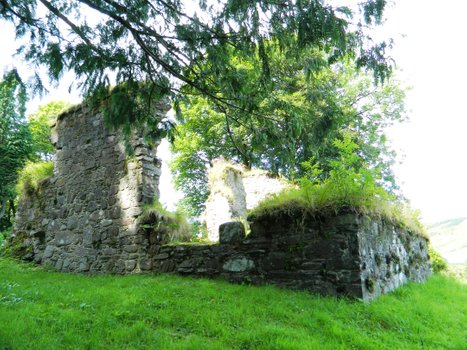 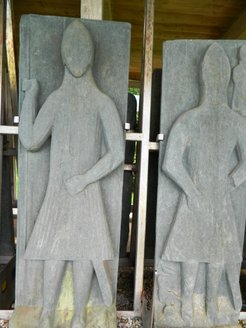 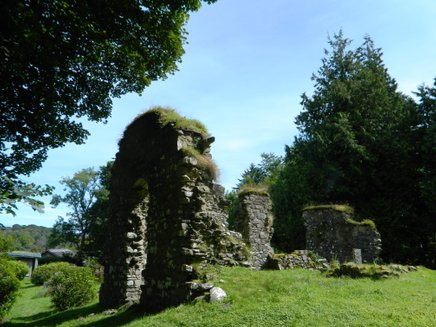 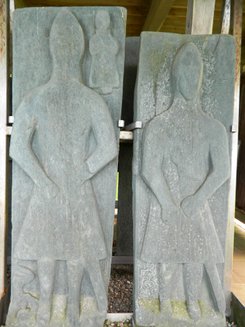