563 ~ Columba arrives on Iona from Dal Riata with a dozen followers.

Columba sets up a monastic community with his followers and quickly gains reputation across Christianity, attracting pilgrims from across Europe and his follows travelling throughout the Scottish Highlands, spreading Christianity among the Pictish inhabitants.

630 ~ Monks from Iona, led by St Aidan, convert the Northumbrian kingdom to Christianity, by which time pilgrims are already coming to Iona to visit Columba's shrine. King Oswald of Northumbria is one of the early pilgrims.

795 ~ A fleet of Norse ships descend upon Iona. The Vikings kill the monks and plunder away the abbey's treasures. The monks try to rebuild, but the Vikings return again and again.

802 ~ Norsemen return once more to Iona pillaging and murdering.

825 ~ Blathmac and several of his fellow monks are murdered by raiding Norsemen.

830 ~ The vikings again return and this time they kill 68 monks.

One effect of the Viking raids is that the monks establish a new community at Kells, in Ireland, which is safe from Norse attack.

It is here the remaining treasures including The Book of Kellsis is taken for safety to Kells.

Yet for all the Viking raids, the abbey does not die. Kings of the Gaelic kingdoms continue to be brought to Iona for burial, including Viking chiefs.  One notable Norse king, Olaf Sihtricsson of Dublin, even becomes a monk at Iona.

1160's ~ Shortly before his death, Somerled tries to re-found Iona at the head of a chain of monasteries stretching through Ireland. It is however left to Somerled's younger son, Ranald, to re-establish the abbey.

1200 ~ Ranald brings in Benedictine monks, and at the same time establishes an Augustinian nunnery a short distance from the abbey.

1494 ~ The Scottish Crown finally crush the Lordship of the Isles, and with it Iona's most important patrons.

1500's ~ The Reformation takes hold, and the abbey is dissolved and allowed to decay.

1609 ~ King James VI gathers 9 Highland clan chiefs to the island and forces them to sign the Statutes of Iona, effectively ending Gaelic separation from the Lowlands of Scotland.

1670's ~ James's son, King Charles I, makes the abbey a cathedral for the Scottish islands, but this is to prove a short respite, and the abbey once more falls into ruin by the end of the century.

Iona Abbey is located on the Isle of Iona, just off the Isle of Mull on the West Coast of Scotland. It is one of the oldest Christian religious centres in Western Europe. The abbey was a focal point for the spread of Christianity throughout Scotland and marks the foundation of a monastic community by St. Columba, when Iona was part of the Kingdom of Dál Riata.

The island of Iona was settled long before Columba arrived, with both Bronze Age burial mound and Iron Age hillfort reminders as to its ancient past.

Why is an Abbey included in a website dedicated to castles? Having explored and researched the history of so many Highland castles, from the decendants of Somerled through to the last of the Lords of the Isles, and the West Highland Clan history that surrounds so many castles, it is impossible not to see the importance Iona once had.

Having discovered many highland chieftan's eleberate grave slabs on our travels, their origins all lead back to Iona. St Oran's chapel on Ioan built by Somerled and last resting place of the Lords of the Isles is a truely awesome place to visit for any castle-finder who has an interest in Highland history.

The museum is really fascinating, containing ancient Highland and Viking relics, including the famous Iona Crosses, some of which are huge, and all are very impressive and utterly unique.

The journey to the small island of Iona by foot ferry after a long treck across the Isle of Mull is a long one, but also a very special and worthwhile experience. 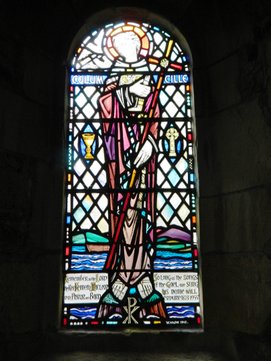 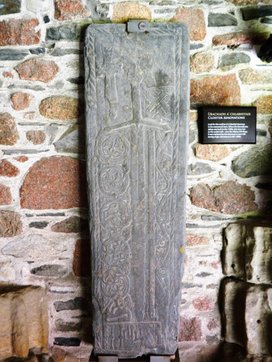