1457 ~ Colin Campbell builds himself a Tower House on the west bank of the River Aray to mark his elevation to the Earldom of Argyll.

1563 ~ Mary Queen of Scots makes a brief visit to the castle.

1640's ~ Montrose and Alasdair MacDonald attack the nearby township but fail to take the castle.

1684 ~ The castle is forfeited due to Campbell rebellion against the Scottish Crown, granted to the Marquis of Atholl, who uses it as a munitions store.

1693 ~ The castle is recorded as being ruinous.

1715 ~ John Campbell, commander-in-chief of British forces in Spain and governor of Minorca, leads the Hanoverian government forces at the Battle of Sheriffmuir, defeating the Jacobite's under the Earl of Mar. For this he is created Duke of Greenwich.

1740's ~ Cracks start to appear in the castle walls due to land-slip towards the river.

1789 ~ Building of the new castle is completed.

1877 ~ A major fire destroys much of the castle, resulting in major repairs being undertaken.

Inveraray Castle has stood by the shores of Loch Fyne, near the mouth of the River Aray, since the 15th Century when the Campbell clan moved from their previous residence at Innis Chonnel Castle on Loch Awe.

The modern Neo-Gothic look of Inveraray castle owes much more to the designs of John Campbell, 2nd Duke of Argyll and his architect Sir John Vanbrugh, than to the needs of a medieval stronghold, 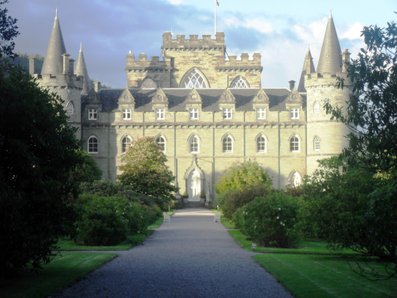