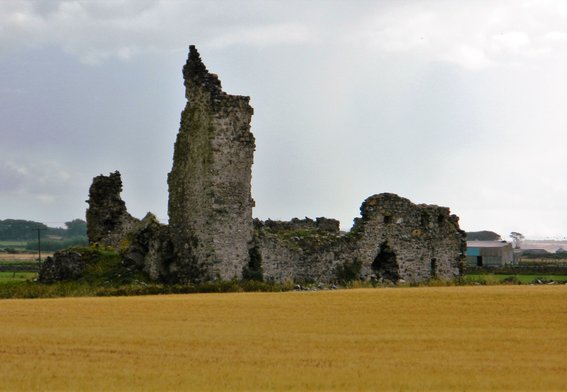 Inverallochy Castle is a very ruinous courtyard castle located on private land within a farmers field. It was once a strong fortress belonging to the all powerful Coymn family and later Clan Fraser.

There were once fine buildings within the courtyard which today is full of rubble from the collapsed tower and walls.

1225 ~ Jardine Comyn, son of William Comyn, Lord of Buchan, is granted the lands of Inverallochy from his father upon William becoming the Earl of Buchan.

1242 ~ Alexander Comyn inherits the title Earl of Buchan, Walter Earl of Menteith and John Earl of Angus. The Comyn's are now the undisputed power in North-East Scotland.

1277 ~ The granting of Inverallochy to Jardine is confirmed in a charter by his half brother Alexander Comyn, Earl of Buchan.

1291 ~ The 'Black' Comyn chief is one of the Competitors for the Crown of Scotland, claiming as heir, of King Donald III. Robert the Bruce and John Baliol are the two leading contenders to the Crown. Baliol is supported by Sir John Comyn, the 'Black Comyn'.

1299 ~ Sir John's son, also named John, and known as 'The Red Comyn', is a co-leader with Robert the Bruce, but also a rival. During a scuffle in Selkirk Forest the Red Comyn almost kills Bruce.

1306 ~  Robert the Bruce invites the Red Comyn to a church in Dumfries to discuss terms of an agreement. However, an argument rages leading to Bruce and his followers murdering John Comyn at the altar. John Comyn's uncle, Sir Robert, is also killed in the church while trying to save his nephew's life. Within months  Robert the Bruce has himself crowned King of Scotland. This makes the Comyn's and Bruce's bitter enemies, which eventually leads to the utter distruction of the Comyn's power, titles, lands and castles, including  Inverallochy Castle.

1513 ~ Folowing King Henry VIII of England declaration of war against France, King James IV of Scotland declares war against England. The letter of declaration of war is delivered to the English court by William. William returns to the Scottish court to delivery King Henry VIII's letter stating his intentions to eject King James from the throne of Scotland.

However, before he can hand the letter to his King, the Battle of Flodden had already been fought, and with it the death of some 10,000 Scotsmen including their King.

1616 ~ The Comming family continue to hold on to Inverallochy Castle until it is finally granted to Simon Fraser of Lovat.

1745 ~ The Frasers are ardent Jacobites and so following the failed rebellion see their castle of Inverallochy blown up by Government forces.

1793 ~ The castle passes to the nearest Fraser relative, William of Udny.

The ruined castle is however eventually abandoned and its stone plundered for building materials.