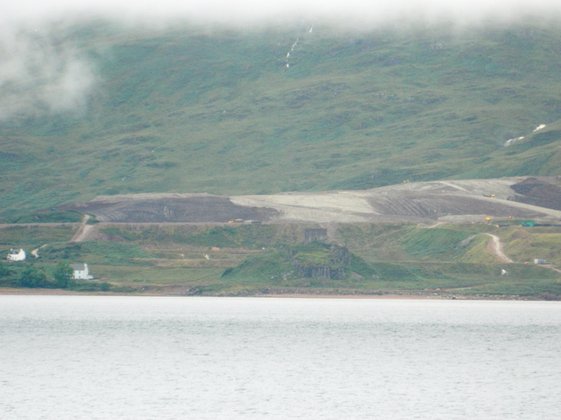 790's ~ The Vikings have a small settlement in what was part of the ancient Gaelic kingdom of Dál Riata.

794 ~ The Vikings raid the relatively nearby Holy Island of Iona.

1480's ~ Ewen MacLean, 5th of Kingairloch, builds Glensanda Castle after the removal of Clan MacMaster from the territory.

The castle is the main base of the Clan Maclean of Kingairloch, and in time supports a thriving community of some 500 people.

1691 ~ The downfall of the MacDonald Lord of the Isles and their associate Clans, with the rising fortunes of the Campbells, see them gain possession of most of the MacLean estates.

1745 ~ Clan MacLean, like most Highland Clans, participate in the Jacobite uprising supporting the House of Stewart. Many members of the clan are killed at the decisive Battle of Culloden. Following the Government's reprisals led by the Campbell's, many of the Clan, like other Clans, leave Scotland for the New World, finding a new life in Canada, America, Australia and New Zealand.

1780 ~ The entire community move 5 miles north to Connach, at the head of Loch a' Choire.

1812 ~ Sir Hector Maclean, 23rd Chief of the Clan Maclean, emigrates with almost the entire population of 500 clansmen and women. In doing so the Clan are not affected by the later persecution known as the Highland Clearances.

The MacLeans "son of the servant St John" of Kingairloch

1174 ~ Gillean 'of the Battleaxe', the 1st MacLean Chief, is was born and later achieves his name because of his fighting prowess.

1249 ~ Gillean dies. He is succeeded by Malise Gille-Iosa MacLean, his son, as the 2nd MacLean Chief. Malise adopts the name, MacLean, and makes it the Clan name.

1263 ~ Malise leads his Clan to victory against the Norsemen on beach at the Battle of Largs during the Scottish-Norwegian War, which leads to King Haakon of Norway to cede the Western Isles to the Scottish Crown.

1310 ~ Malcom dies at the Battle Bannockburn fighting under Robert the Bruce. John Dubh MacLean becomes the 4th MacLean Chief, as well as the 1st Duart Chieftain. He marries Mary MacDonald 'of the Isles'.

1476 ~ The Kinairloch branch of the MacLean's who had previously moved north to hold the lands and castle of Urquhart as Constables to the MacDonald, Lord of the Isles, are removed and return to Morvern. Ewan MacLean, 5th Kingairloch Chieftan, begins the building of a new castle at Glensanda

Glensanda Castle is a small and isolated tower, and probably the most difficult castle to access anywhere in the country, due to its location in the midst of the massive Glensanda Quarry with no road access for the public.

The Castle is prominently located on a grassy mound at the mouth of Glen Sanda on the north western shore of Loch Linnhe, opposite Castle Coeffin on the Island of Lismore, from where the two castles are in view of each other.

The castle is also known as Caisteal Na Gruagaich or Castle Mearnaig and was a Viking Settlement, in Old Norse, the glen of the sandy river.

This simple granite keep comprises two storeys and the walls remain relatively complete, although it has lost its roof. The stair rises within the wall from an unvaulted cellar to the hall above.

The land here belonged to the MacMasters, but it was acquired by the Macleans of Kingairloch who built the castle and made their home here until the late 18th century when they moved to Kingairloch House. They sold the estate in the early 19th century and emigrated to Canada.

The photo we have taken is through the window of Castle Coeffin across Loch Linnhe on a rather misty day.