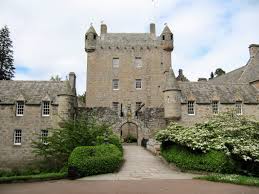 1296 ~ King Alexander II grants lands around Nairn to the 1st Thane of Calder..

1398 ~ A castle of Calder is mentioned in Exchequer Rolls.

1454 ~ King James II gives permission to the 5th Thane to build himself a new fortress at Calder.

1499 ~ The castle builder's son and successor dies and leaves a four-year-old red-haired daughter named Muriella to inherit the castle.

The Campbells in Argyll are well aware of the situation. The second Earl of Argyll sends Campbell of Inverliver and his seven sons across Scotland to bring her back to Innischonnel Castle.

They carry her off but her relatives give chase. After a number of skirmishes, Campbell of Inverliver upturns a large cauldron from their baggage train and leaves his seven sons to guard it, while he slips away with the heiress. The pursuers assume that Muriella is hidden under the upturned cauldron - as the seven sons fight to the death, defending it. Too late, the Calders eventually find that it is empty.

1510 ~ The fifteen year old Muriella marries Sir John Campbell, 3rd son of the Earl of Argyll, therefore bringing the castle under the ownership of the Campbell clan.

Later Sir John sets about improving the castle from money acquired by marrying his wealthy cousin.

1660's ~ His grandson, Sir Hugh Campbell, the 15th Thane, restores the family fortunes and transforms the Castle. Educated in Europe, he returns following the Restoration sets about building new wings and renovated the old tower.

1700's ~ Although sympathizing with the Jacobite cause, the Campbells of Cawdor spend most of this period residing on their Welsh estates.

There is a legend that the site of Cawdor Castle was chosen as a result of a dream by the 5th Thane.

The Thane's dream told him to load a chest of gold on the back of a donkey and turn it loose. He was then to follow the animal until it finally stopped - and to build his castle there.

The Thane duly followed his dream - and after a long meander, the beast stopped beneath a hawthorn tree on rising ground above a bend of a burn, five miles south-west of Nairn. Cawdor castle was duly built there.

Interestingly there is a long dead hawthorn tree which has been carbon dated to 1372, preserved in the basement of the castle, with branches disappearing up into the masonry above...