1164 ~ Somerled, the 12th century Gaelic-Norse warrior who became king of Argyll and of the Hebrides, dies in battle against the Scottish Royal army that is increasingly becoming influenced and backed by the Normans. Before his death he divided his kingdom between his three sons. The eldest, Dougall, received lands in north and mid-Argyll, as well as the islands of Mull, Tiree, Coll and Lismore.  From him sprang the clan MacDougall.

His younger brother, Ranald, received Kintyre, Islay, Jura and Colonsay, and from him clan MacDonald.  The third son, Angus, inherited land in Ardnamurchan and north-west Scotland.

1200's ~ The MacDougall's of Lorne build themselves a 'hall-house' castle on Lismore upon an old Viking fortress.

“In the days when Coeffin was a Norse stronghold, Beothail of the golden hair lived there.  She was very much in love with a young Viking warrior.  When in far-off Lochlann [Norway] this warrior was killed, Beothail grew pale with her grief and died.

Then in the wind that buffeted the walls of Coeffin came the pleading voice of the dead maiden begging her father and brother to carry her bones to Lochlann.  Finally, her bones were washed in the sacred spring of Saint Moluag Cathedral and, thus blessed, were carried to where Beothail’s lover lay buried.

Still the voice came upon the ceaseless winds of the Lynn of Morvern.

A bone was missing, left behind in the well.  A search was made, and the bone was found.  It too was carried to Lochlann.  Then the pleading ceased, though the restless winds often sound a maiden’s sigh around the walls of Coeffin.”

1308 ~ The MacDougall's who having long backed John Balliol's claim to the Scottish throne, against his bitter rival Robert the Bruce, following defeat their lands and castle or declared forfeit to the Crown.

1388 ~ Despite having reclaimed Lismore and their forfeit lands under King David II, their lands are sold by the heiress Janet and her husband Sir Robert Stewart. An exchange of lands results in Lismore becoming part of the Lordship held by the Campbells.

1470 ~ Colin, first Earl of Argyll, grants part of Lismore, including the castle, to his uncle, Sir Colin Campbell of Glenorchy. It remains in the possession of the Campbells of Glenorchy for the next four hundred years, slowly falling into ruin.

1500's ~ The castle is recorded as being abandoned.

Castle Coeffin, named after Caifen, son of a Norse king, stands overgrown upon a rock in the most picturesque location on the western shore of Lismore.

To get there, you have to walk a mile or so along a track near the small Cathedral, where there are the most amazing Highland gravestone slabs displayed by the roadside (see photo below). Towards the end of the track, you will be able to look down towards the castle for a great view of the bay. You will find a gate that takes you down a slate path that towards a property where horses are kept. With consideration you can follow the path all the way to the castle and shoreline.

If you’re blessed with good weather, you will have far-reaching views over to the mountains of Morvern and Glesandra castle.

The castle walls are still quite impressive and provide a spectacular setting with plenty to explore.

This is without doubt a very special place and well worth the relatively short walk. A must castle-find if you get the chance to explore Lismore. 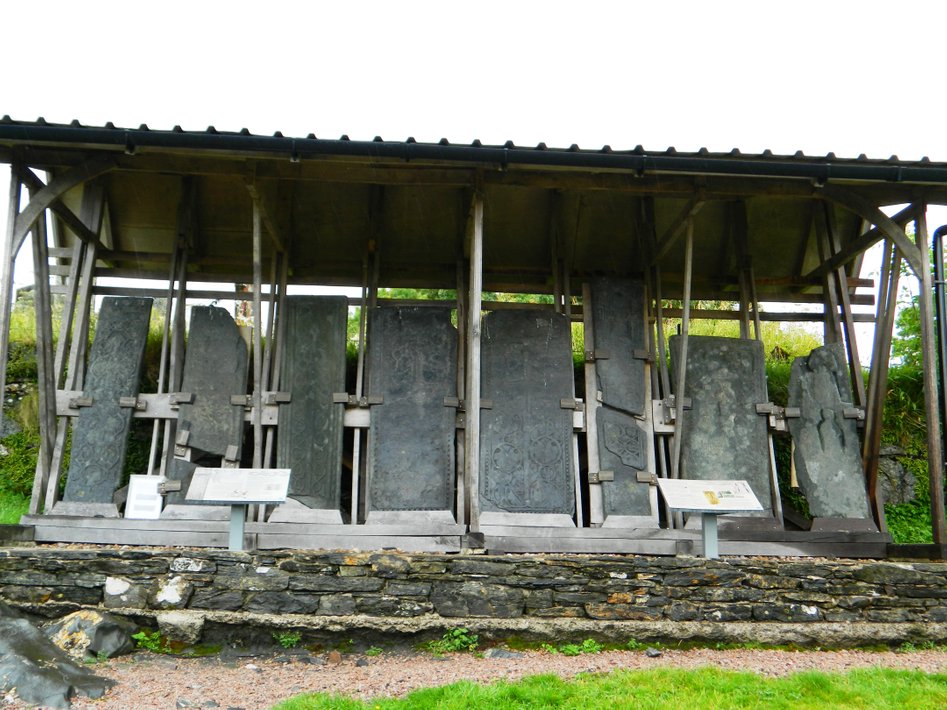