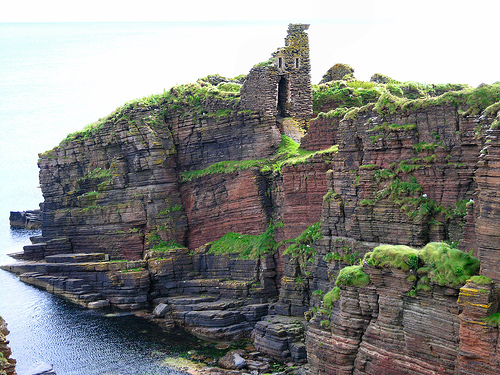 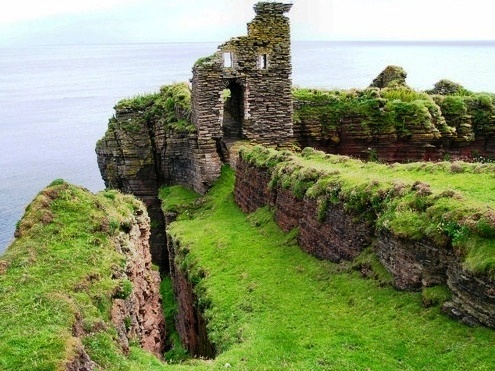 1140 - The notorious pirate and robber Svein Aliefson builds himself a fortress called Lambaborg on the site.

1152 - Svein is besieged in his castle by Earl Rognvald whose displeasure he has incurred. Svein's henchmen had slain an important local nobleman in an argument over rents. The nobleman's son had complained to the Earl who arrives with a strong force to arrest Svein. Svein refuses to hand over his personal henchman, Margad, to the Earls justice and secures himself and his sixty men in the castle. When his provisions are almost exhausted he and his companion-in-arms, Margad Grimson, get themselves lowered to the sea from the hundred foot high castle rock by means of a rope and then both swim along the shore to safety to escape from the Earl.

1427 ~ The Mowat's of Bucholie, builders of the castle, together with their followers, are burned to death in the chapel of St Duthac at Tain by MacNeil of Creich.

1661 - The castle is sold by the Mowat family to the Sinclair's. From this moment the abandoned castle falls into disrepair.

Bucholie Castle is believed to have been built during the 12th century by Sweyn, a Norse pirate and freebooter. However, the present visible structures were built by the Mowat family, who were granted the lands by King Robert the Bruce.

The stronghold stands on a peninsula 100 feet high, cut off from land by a trench 7 feet wide and 9 feet deep. The keep which rose from the edge of this trench measured only 14 feet by 20 feet in total. Only the west wall, standing 30 feet high, and part of the south wall remain. The walls of the vaulted basement are 4 feet thick, but on the floor above only about 2 feet thick.